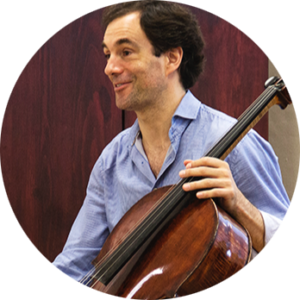 Undoubtedly one of the great pedagogues on the national cello scene, Eduardo Palao has become a benchmark in the teaching of this instrument in Spain.

Trained with great cellists and prestigious pedagogues, he began in Madrid with the renowned María de Macedo, and later studied at the Manhattan School of Music in New York with Marion Feldman and Michael Rudiakov, obtaining the highest marks, and later completed his training with the acclaimed international concert artist Gary Hoffman.

During his training, he has participated in numerous courses and festivals in the US, UK, France, Denmark, etc. with cellists of the stature of Wolfgang Boettcher, Colin Carr, Tsuyoshi Tsutsumi among others.

After obtaining his place by opposition as number 1, he is currently a full professor at the “Joaquín Turina” Conservatory in Madrid, where he has his permanent class. Eduardo extends his work as a teacher to his private professional studio, in which he receives students from all over the country.

Being one of the most demanded professors today, his pedagogical activity extends through invitations to teach courses and masterclasses both in Spain and abroad (Latin America and the USA). Likewise, he attends numerous requests for courses, conferences and classes telematically abroad.

Numerous students trained by him have been winners of prizes in competitions both in Spain and abroad, obtained scholarships and distinctions, performed as soloists with orchestra, and have been admitted to several of the most prestigious musical study centers in the world such as the Peabody Institute, Boston Conservatory, at Berklee, Royal Academy of Music, Royal College of Music, Royal Higher Conservatory of Amsterdam, Trinity College of Music, Interlochen School of Arts, etc.

Parallel to his work as a teacher, in which he is especially focused, Eduardo continues to be active as a soloist and chamber musician. Throughout his career, Eduardo has belonged to different chamber groups, won different awards, and performed as a recitalist and soloist in various venues in Spain, Italy, France, Mexico and the US, among others.