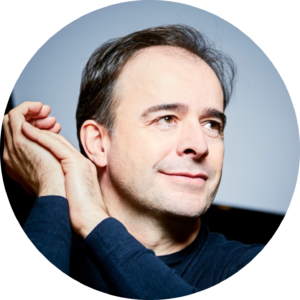 Trained in Madrid (RCSMM), Tel-Aviv (TAU) and New York (MSM) with Joaquín Soriano, György Sándor, Pnina Salzman and Oxana Yablonskaya, Urroz was awarded with the Doctorate in Humanities Prize (UAX, 2017) for the thesis “Optimization of the teaching-learning process of piano technique”. He is founder and artistic director of the International Music Festival of Mendigorría, President of EPTA Spain, and co-founder and president of the jury of the Shigeru Kawai Madrid Contest. He has recorded works by Scarlatti, Allú, Albéniz, Granados, Falla and Mompou for IBS Classical. According to Fanfare magazine, Spanish music offers in Urroz’s hands “sensitively colored versions that are among the best modern versions: relaxed, natural, effortlessly played, which can be mentioned in the same breath as Alicia de Larrocha´s”. The last CD entirely dedicated to the sonatas of D. Scarlatti, has also been received with extraordinary international critics, being recently presented as a featured album on France Musique.