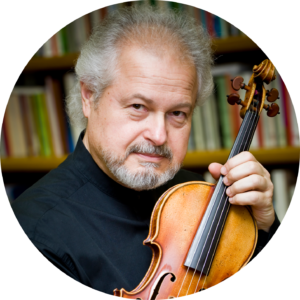 Florin SZIGETI brilliantly finishes his musical studies in the National Music Conservatory, being awarded the First Prize for Violin as well as for Chamber Music, and won the First Grand Prix of the National Violin Contest in Bucharest.

Florin SZIGETI is a founding member of the prestigious ENESCO Quartet, with whom he settled in France, in 1979. With the Quartet, he won the First Grand Prix of the International Chamber Music Competition in Paris, and was awarded the Grand Prix du Disque , followed by several Diapason d’Or and Choc de la Musique for their recordings whose fame goes beyond the frontiers. With the Enesco Quartet he is regularly invited to play in major festivals and concert halls all over the world.

As a member of the ENESCO Quartet, Florin SZIGETI has had the rare privilege of being regularly invited for over 30 years to play on the Stradivarius quartet instruments – unique in the world – belonging to the Spanish Royal Court.

Most of his pupils are students in the Paris and Lyon National Conservatoires (CNSM), or in Köln, Genève, Royal Colleges in London and Manchester, Julliard School or Manhattan School in New-York. Others are now members in orchestras such as : Orchestre de Paris, Orchestre de la Suisse Romande, Orchestre de Toulouse, Monpellier, Pays de Savoie, Pays de Loire.

A highly esteemed teacher, Florin SZIGETI is regularly invited on jurys of international competitions and for masterclasses in France, Belgium Germany, Spain, Finland, in the company of the most celebrated international musical personalities.