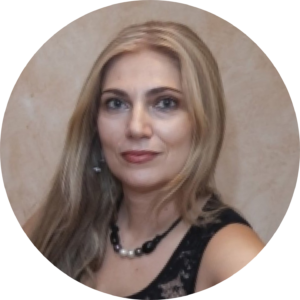 Of Armenian-Russian origin, born in Yerevan (Armenia), nationalized in Spain and settled in Córdoba. She began her first contact with the piano at the age of 5, at the hands of her mother and teacher of that instrument, to continue her studies officially at the age of 6 at the Special School of Music “Tchaikovsky” in Yerevan, where she graduated with a Gold Medal. Later she entered the piano faculty of the State Conservatory “Komitas” in Yerevan with the highest marks, finishing her studies with the honorary degree “Cum Laude”. She graduated from the Spanish Ministry of Education as Doctor and Professor of Piano and Chamber Music. She has studied with the renowned and prestigious professor, Dr. Silva Bunatian, artist emeritus of Armenia, and received Masterclasses with the prestigious Russian pianists, known worldwide.

She participated in the International Piano Course “Homage to S. V. Rachmaninov”, in the city of Tambov (Russia), under the direction of Professor V. Merjanov, obtaining the Superior Master of Arts. He has given numerous recitals and concerts with different orchestras in Armenia and the former Soviet Union, and has also been a regular pianist, performing on several occasions as a soloist with the Chamber Orchestra of the Great Theatre of Armenia.

Since his arrival in Spain in 1994 he has offered numerous concerts in different countries, both European and American, and has recorded several CDs as a pianist and orchestra.  She has been conducted by prestigious conductors such as Michel Plasson, Ralf Weikert, Carlo Rizzi, Bruno Aprea, Roberto Paternostro, Claudio Desderi, Leo Brouwer, etc.

Accompanying outstanding voices such as: Plácido Domingo, Montserrat Caballé, Vladimir Chernov, etc. In Spain, he has performed in important Theatres, and has also offered concerts and recitals, in the framework of national and international Festivals, as well as giving Master Class courses.

He has won several important International Piano Competitions in Spain and abroad, Virtuosity Awards and Special Awards for the best performance of Liszt and Cziffra’s works.