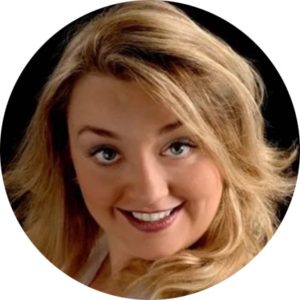 Born in Madrid (Spain). She began her piano´s studies at nine years old and then she started her training in Singing in Zaragoza´s Conservatory with Josefina Montiel first. She balanced her music education with Medicine Degree too.

Subsequently, she finished her Degree in Valencia´s Conservatory “Joaquin Rodrigo”with Patricia Llorens and Gloria Fabuel in the end.

She began her professional career early at 18 with recitals of Spanish and French songs in Zaragoza, Madrid and Valencia.

She also won a scholarship by Giancarlo del Monaco for his “Workshop in stage performance for opera singers”. Due to this opportunity, she could work as a cover in many theatres of wonderful singers as Daniela Dessì or Chiara Taigi.

She made her debut with Contesse in “Le Nozze di Figaro” in Palau de la Música in Valencia.

Related to Oratorio´s repertoire, she has on her case book, Requiem from Verdi,Requiem from Mozart, Ein Deutches requiem from Brahms and Stabat Mater from Dvorak.

In terms of education, she gains master in teaching training programs from the University Autónoma de Madrid and provide accreditaton of C1 certificate in English , C2 in French and B1 in German. 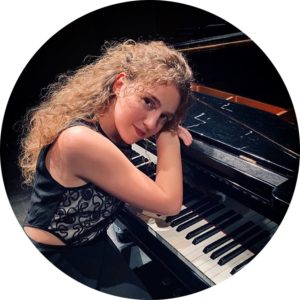 Sofía studied piano at the Centro Superior Katarina Gurska under the tutelage of Nino Kereselidze.
She furthered her piano studies with Alexander Kandelaki, Claudio Martínez Mehner, Ana Guijarro, Piotr Paleczny, Tilman Kramer, Andreas Frölich and Leonel Morales, among others.
Her interest in broadening her musical knowledge led her to combine her piano studies with musicology studies at the Real Conservatorio Superior de Música de Madrid, obtaining this second degree in 2017.
She is the first to graduate in the Master’s Degree “Accompanying Pianist and Repertoire” at the Conservatorio Superior de Música de Madrid, specializing in vocal accompaniment and repertoire.
Committed to teaching, she attends courses on musical pedagogy for teachers, creative intelligence and the creation of didactic programmes given by the Universidad Nebrija and the Universidad Rey Juan Carlos.

She has given several recitals in different halls and auditoriums performing works such as Pictures at an Exhibition by Mussorgsky, Sonata 7 by Prokofiev, Kreisleriana by Schumann, Concerto number 2 by Chopin, Ballade 2 by Liszt and works by Spanish composers such as Allú, Turina, or Albéniz. In the field of contemporary music, she has performed works by the Spanish composer Sonia Mejías, such as Rosa de Alejandría with Rosa Torres-Pardo at the Conde Duque cultural center and Gatita. She has taken part in the cycle “Hoy, Compositoras” organised by the SGAE, premiering the work Li bat bat by Beatriz Arzamendi. Her repertoire also includes works by Messiaen, Schönberg, Berio and John Cage.

In 2021 she played in the A_NEXOS Cycle organised by the AIS Cultural Association, receiving reviews such as:
“hers is an approach to the piano that transcends (as Gustav Mahler asked) the notes themselves, to delve into the essence and the meaning of each of the pieces” Paco Yánez
“Part of Sofía Merchán’s musicological and interpretative decisions go (with very good criteria) along this line in that line that has made us rediscover Mussorgsky” mundoclasico.com

Because of his vocation for opera from an early age, he has been a member of various choral groups. With the JORCAM he collaborated with the Orquesta y Coro de RTVE, with the ONE and the ORCAM, working with conductors such as: Essa-Pekka Salonen, Jordi casas or Josep Pons, he also performed several stage performances at the Teatros del Canal. Together with the Coro de Jóvenes de Madrid, conducted by Juan Pablo de Juan, he has attended national and international competitions and festivals, as well as accompanying them on the piano on numerous occasions.

As an accompanying pianist and repertoire player she has worked at the Escuela Superior de Canto in Madrid. She has been collaborating for years with the Asociación lírica de Zamora. She has given master classes with the Czech soprano Eva Novotná in opera and Zarzuela. And since 2020 with Laura Lavilla with whom she is part of the chamber group Amalthea.

In 2021 she presented her first CD: El arte del Canto where she performs the complete vocal works of Thalberg together with the Soprano Conchi Moyano, as a tribute to the 150th anniversary of the death of the Swiss Composer.

She is currently immersed in her doctoral studies, extending them in the Italian city of Naples.