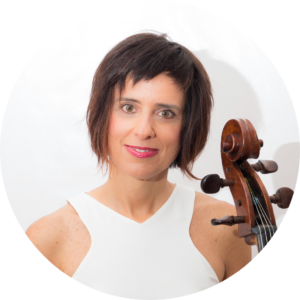 The passion for chamber music and the enthusiastic involvement in teaching have always been the two great focal points of her musical life.

An important discography gives testimony of her intense activity. Recently, she has published in Columna Musica her complete recording of Bach’s Suites for cello solo. From her interpretation the critic have highlighted: «clarity and refined technique always at the service of musicality,… elegant in diction,… flowing in the rhythm, deliciously drawn and carefully explained » (Lluís Trullén, Catalan Musical Magazine), «performed without further transcendentalism than the musical, in direct communion with the divinity. Personal versions, neither romantic, grandiloquent, or historicists. Warm, searching and achieving the beauty and fluency of phrasing, without following a previous fixed script or a unique thought» (Ultima Hora, Baleares). «Clear lines, inviting rhythms,… chained lyric melodies,… the sound of his cello is very, very moving… The technical and sound quality leave no room for doubt… Amparo Lacruz endorses that Bachian garment like no one…» (Allessandro Pierozzi, Melómano). «In the version that Amparo Lacruz offers us of this admirable corpus there is a love and respect for music that reveals an absolute maturity, rare in an interpreter of her youth… she not only offers us a magnificent (and unexpected) performance of the seminal Opus of her instrument, but also a compelling poetic interpretation of it» (José Luis Téllez, Itamar, revista de Investigación musical: territories para el arte).

After her several years of study with distinguished teachers in Spain, England, the U.S.A. and Austria, she became a founder member of Manon, a chamber ensemble which had an international presence for ten years, premiered numerous works by contemporary composers and left unique recordings, some of reference, like the Quartet for the end of time by Messiaen.

As a member of the Kandinsky Trio, Amparo toured in Europe, Asia, America and the Middle East. The albums Schoenberg and Barcelona, ​​Clara Schumann and Johannes Brahms, the award-winner Monographic Joan Guinjoan and her version of R. Gerhard’s Sonata with the pianist Emili Brugalla stand out. She has also performed in the Netherlands with the prestigious violinist Emmy Verhey and the pianist Paul Komen. Her enormous versatility has led her to premiere at L’Auditori in Barcelona the music-theater play “Suite de l’aigua” by Carlota Baldrís, with set design by Joan Font (Comediants), and to play alongside the jazz pianist Uri Caine in Spain, Germany and Italy.

Amparo Lacruz is invited, as performer, teacher and jury member, at the Cello Biënnale in Amsterdam and at the Vivacelli Festival in Seoul. She participates every summer in the Peter de Grote Festival in Groningen (The Netherlands). She has given master classes at Boston University, Oberlin College of Music, California State University and Westchester University in the United States, at Kunitachi College in Tokyo (Japan), the Shanghai Conservatory (China), Universidad de las Rosas (Morelia, Mexico), in the Agustín León Ara Course (Costa Rica), and for the Young Valencian Orchestra, the Young National Orchestra of Catalonia (JONC) and the Young National Orchestra of Spain (JONDE).