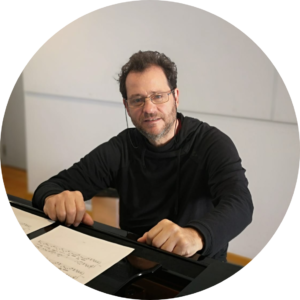 Tensy Krismant (Havana, 1964) is head of the Piano Department and professor at the Conservatori Superior de Música del Liceu. A graduate and concert pianist from the Instituto Superior de Arte de La Habana (1986), he has been a disciple of masters such as Zenaida Romeu, Silvio Rodríguez Cárdenas, Jorge Gómez Labraña, Andrés Alén, Jorge Luís Prats and Stanislav Pochekin. His piano training is marked by the legacy of important representatives of different piano schools such as Heinrich Neuhaus, Gát Jozfet and Walter Gieseking. He has received master classes from great international pianists, including Halina Czerny-Stefanska, Rudolf Kerer, Yonty Solomon and Lev Vlassenko.

As a performer, arranger and composer, he has chosen to explore the rhythmic roots of Cuban musical genius. With his album Flash Cubano, he combines and places Cuban concert music for piano and Afro-Cuban popular percussion on the same aesthetic level.
Krismant has won prizes in various competitions, such as the Piano Competition of the National Union of Writers and Artists of Cuba (UNEAC), the Prize for Artistic Creation of the Higher Institute of Art in Havana and the First Prize in the Teresa Carreño Piano Competition in Caracas.

In 2003, Flash Cubano was shortlisted for the Latin Grammy nominations of the year, and nominated for the 2003 Cubadisco Award. In 2010 he won the Best Instrumental Music Award (CD Pacifico) at the Cubadisco Festival.

His recordings for the Sonogramme – Paris label and for AYVA MUSIC (El cant dels Ocells and Recital) have been praised by the specialised critics. This has also been the case with her performances at the National Theatre of Cuba; the Auditorium of the Louvre Museum in France; the Franz Liszt Hall in Budapest; the Ferrara Theatre in Italy; the United Nations Palace in Geneva; among others that have taken place in Spain, Austria, Portugal, Switzerland, the United States, Uruguay, Venezuela and Argentina.

Tensy Krismant regularly participates as a jury member in various international piano competitions in Europe and America. Parallel to his musical career, Tensy Krismant develops his vocation as a painter. In 2003 he presented his first exhibition and concert in Geneva, at the headquarters of the World Intellectual Property Organization (WIPO). The following year he returned to Geneva to exhibit his works at the World Trade Organization (WTO). In November 2005, he gave a concert at the Palais des Nations at the opening of the ArtCuba event. In Spain, he has exhibited his paintings in several group shows.

With his musical compositions, he has collaborated in “Protecting Children in Conflict Situation” for the United Nations Children’s Fund (UNICEF).
Page load link
Go to Top