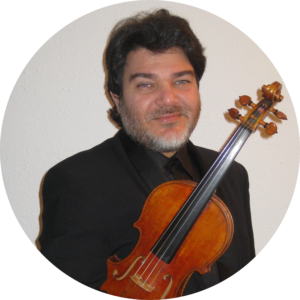 He finished his higher and postgraduate studies at “Instituto Superior de Arte” in La Havana (1986).

He began his professional career (1981) in the “Orquesta de Cámara de La Habana” as soloist and chamber musician of the “Centro Nacional de la Música de Concierto” and as professor at “Guillermo Tomás” and “Amadeo Roldan” conservatories in the same city.

He has performed as a soloist under the direction of great masters such as Tomás Fortín, Miguel del Castillo, Pérez Mesas, David de la Mora among other directors in different orchestras of his country.

He was invited by the National Symphony Orchestra of Cuba to participate in the concert cycle for the 50th anniversary of the orchestra foundation, performing Max Bruch’s Concerto No. 1 Op. 26 under the direction of Master Álvaro Manzano (2010).

He is regularly invited to give courses and master classes in different scenarios, carrying out a fruitful pedagogical work for the training of young artists.

He has had students awarded in several contests such as: Concorso Internazionale “Note Sul Mare” of Rome, International Violin Competition “José White” of Havana, Musical Interpretation Competition “Vila de Salou”, Violin Competition of Barcelona, as well as the tenure in the “National Youth Orchestra of Catalonia” JONC.

His students have also obtained scholarships to study at prestigious schools such as the “Escuela Superior de Música Reina Sofía”, “Chetham’s School of Music” in Manchester, “Purcell School of Music” in London and “Jóvenes Promesas” scholarships from the music foundation “Ferrer Salat” to study at the Conservatorio Superior del Liceo in Barcelona.