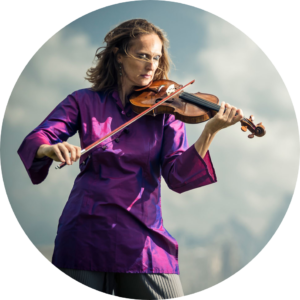 I was born in Italyin 1960 in a family where music was necessary and important. I grew up having the luck of studying with excellent teachers, chamber musicians and international soloists as Franco Gulli Salvatore Accardo and Mario Benvenuti that taught me to take violin seriously, the value of playing with others and the basic need of listening. Many years later I try to follow their steps and transmit the same principles to my students.

Being curious by nature, I have gone through various professional stages and have worked in very different musical realities. At the age of 20 I started to win several soloist places in many professional orchestras and that is how I decided to join the orchestra of the Teatro La Fenice in Venezia, one of the most important opera theaters in Italy, where I remained until 2005 as concertmaster and help of the first violins. While various symphony and chamber orchestras, from the great symphony such as the Orquesta de Santa Cecilia in Rome to renowned chamber orchestras such as the Orchestra d’Archi Italiana, invited me as the first part.

Since 2006 I have been invited as soloist of the second violins in the Mozart Orchestra, the last project directed by the great Claudio Abbado, with whom I continue to play since then. For 15 years I have left the orchestra of the La Fenice Theater in Venice to become a violin teacher at higher conservatories in Italy.

I have been a teacher for many years in Bolzano – Bozen and since 2019 I have been teaching at the J. Tomadini Conservatory of Udine. I am also a violin teacher at the Conservatori Superior del Liceu in Barcelona and I have been regularly invited to institutions such as the Gustav Mahler Jugend Orchester Academy, the Young National Orchestra of Catalonia and to teach masterclasses at the Colombian universities of Bogotá, Medellin and Cartagena.

Parallel to my orchestral and teaching activities, I have participated in several international chamber music festivals together with renowned pianists such as Frank Braley, Jeffrey Swann, Itamar Golan, Claudio Martínez-Menher, the Soloists of the Lucerne Festival Orchestra, of the Orchestra Mozart and many other artists.

From a very young age I learned from my teacher Mario Benvenuti to have fun playing the viola and even now I really enjoy doing it, alternating violin with viola in various chamber ensembles such as the Musicaperta Ensemble of Barcelona and, among others, in duo with the Bulgarian pianist Vesko Stambolov.

In the early ’90s I collected several awards in different violin competitions and, among them, I won the 2nd prize in the prestigious “Città di Vittorio veneto” Competition in 1993. Since the end of the’ 90s I have had great interest in ancient music and baroque executive praxis. In 2002 I was awarded at the international “J.S.Bach” Competition in Leipzig and since then I have collaborated with many baroque orchestras such as the Venice Baroque Orchestra led by Andrea Marcon, participating in international tours, recordings and solo concerts.

Nowadays I regularly collaborate with the group “Cristofori Ensemble”, an international group with classical instruments, in various record projects and international festivals.

I have recorded the piano quintets of O. Respighi and G. Martucci as first violin of the quintet “Five Lines” (2011) for the Italian magazine “Amadeus”.

I am currently in the process of preparing and publishing a double CD with the Six Sonatas and Partitas by J.S. Bach for solo violin. I have recently obtained a Master’s degree at the University of Barcelona, “Music as interdisciplinary art”, in which I have created an original audio-visual project on Bach’s “Ciaccona”.

I am fortunate to play with two excellent violins, an Ansaldo Poggi from 1958 and a David Tecchler from 1727, two intense and very different voices that constantly inspire me and facilitate fascinating timbral searches.